A team of volunteers are helping with the huge task of recording the grave memorials in Rodborough Churchyard. It’s the perfect lockdown activity, combining outdoor and indoor activity. The more we look, the more we notice, such as this stonemason’s name on the corner of the a stone.

The wonderful efforts of the Community Payback team in the churchyard have made it easier to see the memorials.

Especially remembering Rodborough’s Herston Chandler who died as a POW in Japan.

News has been received by his wife that Gunner Herston Chandler R.A., only son of Mr & Mrs Herbert Chandler of Walkley Hill, Rodborough, Stroud has died from dysentery while a prisoner in Japanese hands. Gunner Chandler was captured in Java at the end of 1941 and his relatives heard nothing about him until about two months ago when a notification was received through the international Red Cross association that he was a prisoner. His father is head of the wine & spirit department of Stroud Brewery and is a prominent member of the Special Constabulary.

Are you commemorating the event at home? This is tomorrow’s history – we’d love to see your photos.

We are taking part in an exhibition at the Sub Rooms for the 75th anniversary of VE Day. Due to heavy censorship, documented evidence about WW2 is scant. The following quotes are from the Church Minute Book in early 1941. Do you have any memories, stories or information?

“NOTE The fire-watching squad met later in the month outside the church and Capt. Forster attended and a practical demonstration was given of the working of the hose and the stirrup pumps: a ladder had been borrowed from Mr Shaylor and squad by this means explored the danger points of the church roof and how to tackle the various problems involved.”

Fire-watching – “The Rector promised to have his garden-but transferred to the bottom of his garden: this, with a store of deck chairs would be a comfortable pied-a-terre for the watcher on duty … Messrs. Rodway and F.E Miller promised to do the necessary spadework: as regards the ladder loaned by Mr Shaylor it was considered necessary to go to the expense of purchasing this, a course very much favoured by the owners and the Rector promised to see Mr Shaylor on the question.”

The lettering on Rodborough’s WW2 memorial has been repainted thanks to generous donations to Remembering Rodborough. The wording is much more legible, though the reflective stone is difficult to photograph.

Rodborough Parish Minute Book – 9th April 1840
“At a special vestry meeting held this day according to a notice fixed on the church door and pursuant to the Act of Parliament it was resolved that the application of Jacob Haines to be sent to Australia with his family of six sons and one daughter should be acceded to and notice then sent to the Board of Guardians.”
(Provision for the emigration of the poor, with the cost being borne by an emigrant’s home parish, was included in section 62 of the 1834 Poor Law Amendment Act.  http://www.workhouses.org.uk/emigration/.)
It seems, however, that Jacob didn’t go, as the family are found on later census records at Houndscroft. He was a woollen weaver born in 1796 and lived to the age of 84. With all those sons there must be lots of Haines descendants around – wondering if they know how close they came to being Aussies!

I have a feeling of delight and amazement when I become aware of something that I must have passed hundreds of times and not noticed. Cresby Brown or ‘Mr Red’ has been carefully recording Ordnance Survey benchmarks before they disappear.

Looking at http://benchmarks.mister.red/#rodborough I realise how unobservant I have been. There are 28 benchmarks photographed in Rodborough.

The term benchmark, or bench mark, originates from the chiseled horizontal marks that surveyors made in stone structures, into which an angle-iron could be placed to form a “bench” for a leveling rod, thus ensuring that a leveling rod could be accurately repositioned in the same place in the future.

All the news in the media about the Armistice centenary has stimulated many family memories.

We have been sent a photo of Albert Edward (Ted) Clarke who lived in a cottage in Kitesnest Lane. He survived the war and emigrated to Australia with his family in 1927.

We know he lived at a group of cottages and out buildings known as the Homestead above the allotments in Kitesnest Lane.

We believe the buildings were demolished in the 80s. The photo below shows cider making at The Homestead in the 70s 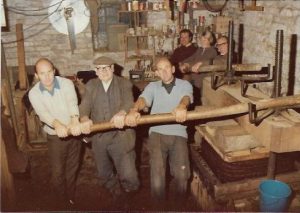 Does anyone have any photos of the cottages?

It’s finally time for Rodborough to say thank you to Sergeant John Cuthbert who gave his young life in 1944 when his plane was lost, believed to have been shot down near Brest in France. He was 23 years old and left a young wife and a baby born three weeks later. His name has now been added to the WW2 memorial. 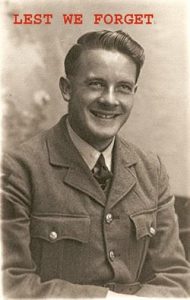 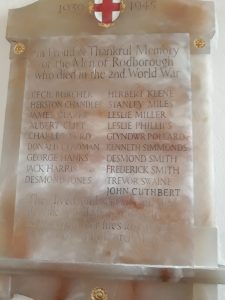 After a beautiful service on Remembrance Sunday flowers and messages were placed under the WW1 memorial in an attempt to recreate an impression of the striking display at the unveiling in 1920. 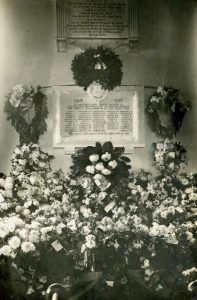 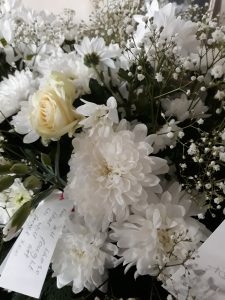 Initially placed randomly they formed a rather artistic floral heap! 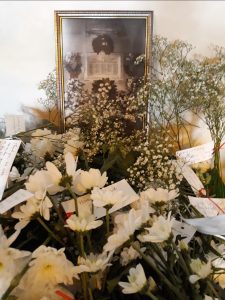 A talented lady has now worked her magic and they are transformed to a beautiful display that will last a little longer. 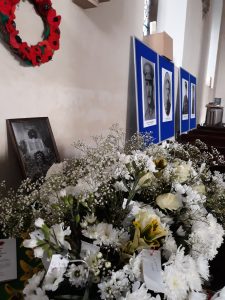 Remember our note last year about phone boxes being decommissioned? 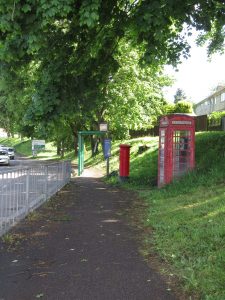 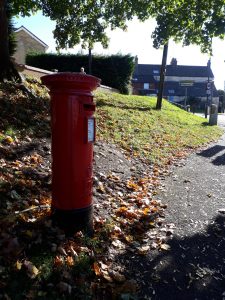 We have had an enquiry about the ‘Lonely tree’ on the common. Does anyone know its age? Has anything been written about it? 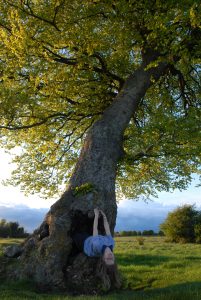 The war memorial was cleaned yesterday and is looking much better. It may continue to lighten a little in the next few days as the cleaning agents continue to work. 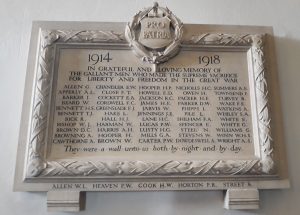 Apparently this memorial would cost around £6,000 if it was commissioned today! It cost £62 in 1920. Taking care of it is a fitting tribute to the fallen of the parish and we are very grateful for the support of the community, the Church and the Parish Council. 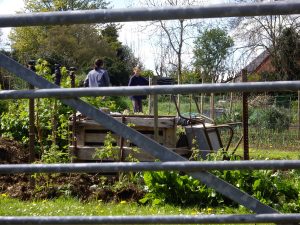 Marked on the 1909 land survey map as Allotments Gardens. Does anyone have any idea how far back this land use goes?

We are very excited to have been loaned Rodborough Scouts Archive. We will be busy scanning for quite a while, but hope to share some of the pictures here.

This little snap was in the bottom of the box with the woodlice! Any thoughts?

Last Saturday evening we were proud to host a performance by Spaniel in the Works Theatre Company of Tommy Atkins and the Canary Girl. It was a powerful and emotional performance depicting the lives of one Gloucestershire family in WW1 and fitting that it was held in the church alongside the war memorial for which we are raising funds to clean. Thanks to all who supported us and to the additional generosity of Rodborough parish Council, we now have the funding to go ahead. 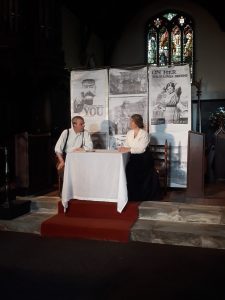 One of the best things about Remembering Rodborough’s website is reaching people across the globe. We’ve had contact from a delightful lady in the US who has very special memories of coming from Birmingham to stay with grandparents at The Pike House opposite the Prince Albert. This photo of the garden is from c1940. Does anyone have any photos of the Pike House? 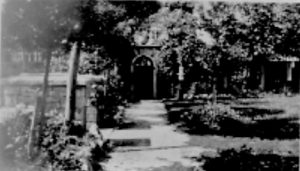 Thank you to everyone who made this morning’s event such fun. Sometimes it’s like the Antiques Roadshow without the cameras. These exciting packages bundled in old newspaper and brown paper have a remarkable story; Ernest Mills of Park Lodge, Dudbridge Hill was employed by the Apperly and Curtis Woollen Mill when it became bankrupt in 1933 and Charles Apperly “moved quickly to the South of France”. His workers were paid off in cloths lengths and those seen here have been a treasured family possession. Today they were on their way to a safe home at Stroud Museum. 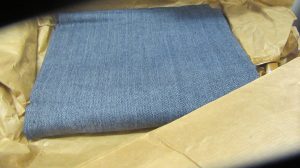 Have you had a look at Know Your Place ?

Covering the South west of England, Know Your Place is a digital heritage mapping resource to help you to explore your neighbourhood online through historic maps, collections and linked information.

It’s worth the effort required in learning to navigate the maps.

Look at this screenshot of Rodborough in 1835 – there’s not much there!

Remembering Rodborough began as a Heritage Lottery funded project in 2009. Part of the brief was the audio recording of memories. A very precious archive was acquired then and has been added to and we are delighted to be gradually passing this material to the Stroud Voices website who will publish, edit and reference  it so that searches of place and subject are possible.

For a bit of nostalgia on a wintery day, take a look at http://stroudvoices.co.uk/find/#rodborough