Thanks to Rodborough Scout Group for permission to copy items from their archive.

Rodborough Scout group was formed at Rodborough Tabernacle in 1909 by Rev. Ernest Watson, assisted by Fred Daniels and Frank Shaylor. One of the first Scouts was Mr Fred Hatton who was guest of honour at the 80th birthday celebrations in 1989

A meeting for younger boys began in 1914 and in 1916 became the first registered Rodborough Cub Pack.

One of the earliest items in the archive is a Scout leader’s small notebook. It notes members, subs and plans and has various items pasted inside.

The Scout Master was Mr Cyril Taylor and his ASM was Mr Harold Haines. The summer camp was held at Cranham.

The GSM was Rev. Watson.

The Re Lawrence Miller formed an extra Scout troop at The Endowed School.

Summer camps were held in 1935 at Porlock, Somerset

At the Weymouth camp a diary was recorded in an exercise book with photos. 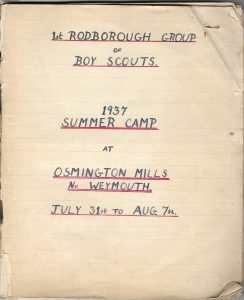 The Scouts left Stroud by GWR and the Rovers by car. 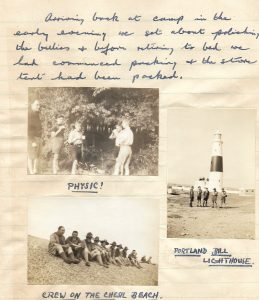 From Neaths of Preston 21 loaves of bread were ordered. A note records that 4lbs of steak was sufficient for one meal. The total cost of food, excursions and transport for the week was £20. 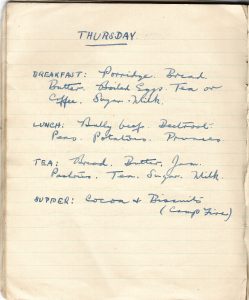 The Rover Den was built during 1936-7 and opened by Colonel W.F. Walton HQ Commissioner for the Rover Scouts. Mr Lionel Daniels became the Rover leader.

The picture may have some significance because there is a mix of “regimes” here among the ladies. The darker (blue) uniforms define them most likely as Rangers, the lighter coloured (blue) uniform is probably Guides, while the other lady is probably in a brownie uniform.

The lady in the middle does not seem to be in uniform and may be Mildred Humpidge.  Miss Humpidge was the step daughter of the Rev. C.E Watson (of Rodborough Tab), and she started the Rodborough Guides in 1914 when Rev Watson started the Scouts at the Tab. She was Captain of the Rodborough Guides until 1936 (then Captain Barbara Daniels – sister to Lionel and Eric and Betty Daniels took over possibly after the war, with my Nancy Cawthorne as Lieutenant).

During the 1940s Eric & Lionel Daniels led efforts to re-establish the Group back to strength. Rev. Watson died in 1942.

By 1946 there was a mixed troop of Scouts and Sea Scouts. the latter led by Mr K. Jarvis (Tarka) and Mr Norman Blandford became ASM.

In 1946 a small plantation of beech trees was was placed on Rodborough Common to mark the visit in 1915 of Lord and Lady Baden-Powell. It is marked by a brass plaque.

Sadly, the trees died in the following severe winter of 1947 and in Autumn of that year were replaced by evergreen fir trees.

1949 – celebrating the completion o f 40 years of Scouting in Rodborough – photos from a commemorative card. 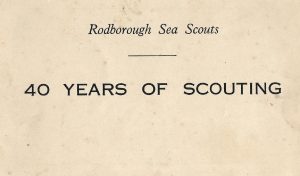 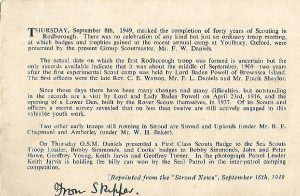 The Group now known as 2nd Rodborough Scouts met under the Little Chapel in the former stables, above had been the coach house.

Lionel Daniels tragically died in a car accident in 1958. He had been head of the family firm T.H & J. Daniels and his death was a great loss to the district. 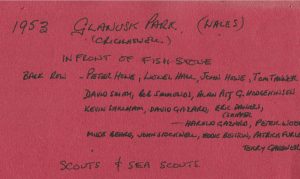 Tragically Eric Daniels died in another car accident in 1970. For a time Peter Howe and John Marks stepped into the breach, with cubs led by Mr D.J. Holford and later Mrs Marks. Eventually Mr Wally Cawthorne who had been an ADC for Scouts was called upon to become Rodborough’s GSL.

Mr Wakefield took over as GSL, with Mr W (Prof) Alltimes leading the Scouts with Mike Swayne as ASL.

In 1972 Len Scarrot became GSL and Ernie Major became the Scout leader. Due to the baby boom of the 60s and new housing in the parish numbers swelled. There was a full Scout Troop and two Cub Packs, one using the Rover Den.

Regular summer camps were held at Youlbury, near Oxford, Southampton, Warwickshire and elsewhere.

Len Scarrott was still GSL and was succeeded by Nick Peters in 1989. Along with the usual summer camps, the District organised jamborees at Selsley. Scouts were assisted by Alan Prowse and Michael Edwards. 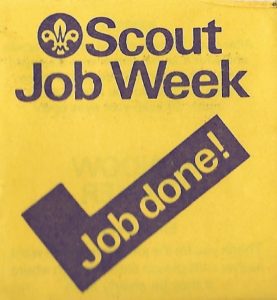 Tragically in November 1982 Venture Scout, Philip Cook died in a car accident and it deeply affected many young people in the group. 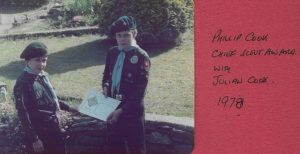 Cubs meanwhile were led by April Edwards, Agnes Arkell and Ann Milston, later Martyn Weaver took over leadership.  They had now returned to being a single pack of twenty-four.

Beavers continued steady with Mary Jones at the helm with Denise Westerman and Liz Mooney as Assistant Beaver Leaders.

John Hallett acted as Scout Leader with Senior Scouts assisting as Young Leaders. He was followed by Paul Oates.

Mike Oates took over as GSL, followed by Martyn Weaver.

In April the Beavers led by Mary Jones and Denise Westerman celebrated 20 years.