The manor, said to be 150 years old, was then owned by Mr Stanley Marling and tenanted by Judge & Mrs Ellicott. On the evening of Tuesday 28th August, the judge and his son were playing billiards and heard something fall in the room above. On discovering his wife’s bedroom ablaze, the judge telephone the fire brigade at 9.15pm.

By the time two horse drawn engines arrived the north-west wing was engulfed in flames. Assistance was provided by the police and the hand engine from Woodchester Saw Mills. The equipment and access to water, which was eventually drawn from the pond, proved inadequate. Remarkably, no one was injured though the firemen took considerable risks; one had a narrow escape when the roof collapsed and another, having tied two ladders together, directed water onto the inferno from the top of the walls. The police and staff attempted to remove furniture and possessions; ‘sofas, tables and chairs were piled in a confused mass’ in front of the building.

In little over an hour the main part of the building was alight, fuelled by wooden panelling and beams. ‘Bath Road soon became thronged with hurrying crowds, many hundreds of people proceeding to the scene’. The safety risks were considerable, ‘Dense volumes of smoke wafted upwards, myriads of sparks scattered and fell blazing for hundreds of yards around … Glass shattered in all directions…Probably the most strinking scene was at 4am when the splendid oak panelled room was ablaze.’
By morning the whole place was gutted, except two or three rooms which later rekindled. The exhausted fire brigade retired at 4pm the next day. £15,000 to £20,000 was the estimate of damage to the manor, which had housed 25 bedrooms, 10-15 reception rooms and reportedly ‘as many windows as days in the year’.

The ‘trifling accident’ was ascribed to curtains or blinds encountering a gas light or candle!

Acknowledgements to the Stroud News & Journal and Howard Beard. 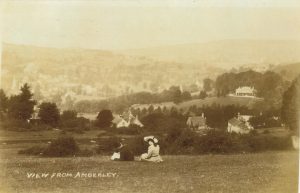 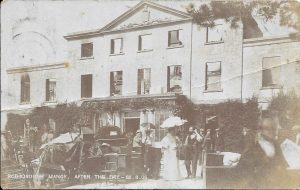