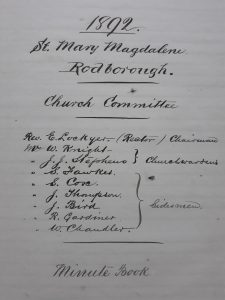 Begins with a unanimous decision to meet at least every 3 months.

Much of the discussion centres around ‘sittings’ or the allocation of spaces in pews, repairs and the ‘new burial ground’. 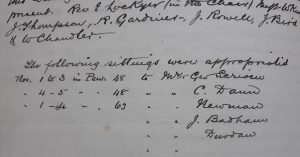 “Mr Dowdeswell to be employed to keep the whole of the graveyard in proper order and condition for Five Pounds pre year”.

The opinion of the Diocesan architect to be sought regarding proposed renovations and plans were approved.

“Mr W. Chandler proposed and Mr J.J. Stephens seconded that all the pews in the church be thoroughly scrubbed out as well as the chancel every three months”. (To be carried out by Mrs Whatley)

Mr Knight offered to speak to Mr Alf. Apperly regarding his pew.

“A discussion took place re. school boys remaining in the church during the sermon & it was decided they should for a time, to judge of their behaviour”.

Miss Cordwell, organist for 18 years resigned (the right to appoint, which by custom belonged to the Churchwardens, was claimed by the Rector)

“It was proposed that the salary of Mr H Ellis be reduced to £7 in consequence of the proposed arrangements for the future cleaning of the Church.”

“Mrs Fisher To be appointed to clean the Church being paid £5 per annum and the Churchwardens finding brushes, dusters, etc. the church to be thoroughly swept and dusted every week and washed through once a quarter.”

“Mr G Chapman was appointed organist pro tem at a pro rata salary of £12 per annum.”

“… The offertories are urgently needed for meeting the interest on the debt due on the restoration fund.”

Resolved to administer the offertories as below: 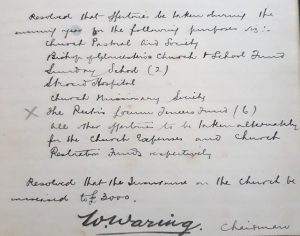 The insurance on the church to be increased to £3000.

Verger’s salary to be raised to £8.

Organ blower’s salary to be raised to 30 shillings.

Mr Apperly Jnr. promised to connect electric lights to the large tent for the Bazaar. The Kings Stanley Brass band were to play for the sum of £5. the police would be on the ground from 2 o’clock till closing time

The bazaar raised just over £80 profit towards the restoration fund. 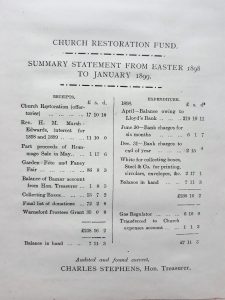 “Mr Bird mentioned that he had received an application for the purchase of the remains of the old clock now in the possession of Mr W. Knight and it was decided to sell the same for 3/6.

A special meeting was held to fill vacancies following the death of Mr P. Dowdeswell and the emigration of Mrs Fisher to America. Only one application was received, from Mr Ellis, who was willing to undertake both posts, namely cleaning the church and working in the churchyard for the combined salaries of £5 each  – he was appointed.

Rev. Waring submitted the architects plans for the for the screen for the North & South aisle, the cost of erection estimated at £52. This was accepted.

The rector also mentioned the anticipated alterations of the Prayer Desks and Choir stalls, but this was left for future consideration. 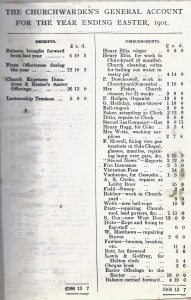 The minutes become only those of the Annual Easter Vestry meeting, covering accounts, thanks and appointment of wardens and sidesmen. Accounts where pasted into the book are included here. 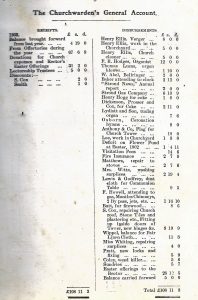 “Mr Whittingham mentioned that with regard to the recent fire at the Church that the damage could be made good for £49.15. The Insurance company would allow the claim in full as well as settling the Fire brigade account.”

A vestry meeting was called in November to apply for a faculty for the erection of a stained glass window at the East End of the Church, the gift of an anonymous donor. A sketch of the window met with approval and the generous offer was accepted.

Sir Alfred Apperly was present for the first time at the annual Easter Vestry meeting. The Rector “referred to the addition to the church of the beautiful stained glass memorial window the gift of Sir Alfred Apperly.”

“Mr Whittingham submitted the Churchwardens’ accounts for the past year which showed a small credit balance. He referred to the generous support to the church by Sir Alfred Apperly.”

“Mr W.G Browne (Rodborough School Headmaster) referred to the need for the provision of a new organ and heating apparatus. This matter was discussed at some length, the rector promising to write to Mr Carnegie in respect of the organ.”

“The Rector reviewed the circumstances under which a new organ and heating apparatus had been installed in the church which together with a other alterations and improvements had involved an expenditure of £660.”

For the first time since 1910, Sir Alfred Apperly was not present at the Annual Vestry meeting in March. He died in September 1913 and it is likely that his absence was due to illness.

April – The Rector was absent due to the illness of a near relative and the sympathy of all present was expressed to him in his serious trouble.

The Rector said that not a lot had happened during the year. “Of course the war had engaged their thoughts for the last eight months and owing to the severe winter the congregations had fallen off somewhat and the collections had not been as good … They could only hope that God in His might would bring the war to a successful conclusion and that once more they might have the blessings of peace (hear, hear).”

The Bishop would visit them in June.

April – Revd. Waring declared that this was his 19th Annual Vestry Meeting. “He was very satisfied with the finances, and thought that however much the War was deplored it had made people think more, and they had been very generous towards the Church.

The Bishop, during his visitation, had recommended that a safe be fixed in the wall of the Vestry in which to keep the Communion Vessels, instead of them being kept in a box at the Rectory, and at the close of the War this would receive attention. He also recommended obtaining a font cover  and Mr J.S. Martin had provided one. (The nature of this cover is unknown and the current font lid was made as a war memorial in 1920.)

Lady Apperly’s kindness in presenting an Altar Frontal, worked entirely by herself was acknowledged.

“(The Rector) was sure they all regretted the war still being carried on, and he prayed the time would soon come when  the blessings of peace would be once more enjoyed.”

Responding to thanks to Mrs Waring and the interest she took in the the church and for the floral decorations, the Rector said “… her hands had been so full recently with matters in connection with the War that perhaps she had not devoted all the time she would have liked to do.”

Mr J.W. Bird raised the question of the Church insurance that in view of the risk of damage by German aircraft, it might be advisable to pay the necessary premium for cover. After discussion it was decided that the danger was remote and the expense not warranted at present.

April – “It was much to be regretted that the awful war was still continuing and it was sad to know that about 400 of the young manhood of the Parish had been required to leave their homes and serve the Country, and that some unfortunately had made the Great Sacrifice and given their lives. … In the Church there were several things which required attention but (the Rector) was afraid they would have to wait until normal times …there were choir stall needed and an engine for blowing the organ .. the most urgent matter and that which could not be left was the necessity of extending the Grave Yard …”

A special vestry meeting was held to discuss previous matters arising. On the the water supply to the boiler; expert opinion suggested that catching the rainwater from the tower roof was not feasible and recommended that a supply from the water main would be more effective. The estimated cost was £15 and it was agreed that the matter should remain in abeyance.

The engine for blowing the organ was discussed. Mr Robert, the organist was unable to find a man suitably qualified for organ blowing. a water powered engine was ruled out due to insufficient pressure and that the water in the main was usually turned off on Sundays. It was agreed to look at the cost of an electric engine.

Regarding the churchyard, the available space would not last a further year. The Rector was willing to give ground currently  used as the rectory orchard. The bishop’s consent would be required.

The Rector was deemed able to give the Rectory Orchard Land for use as an Grave Yard extension and estimated costs were discussed.

The Churchyard Extension Committee met and it was decided to ask for donations. the members were allocated areas in the parish to canvass and a ladies committee was to be formed by Mrs F. Poole.

£32 had been received to by 18th September, rising to £60 by the beginning of October and £107 by 23rd October. An objection from Mr E. Beavis was withdrawn on condition that a screen of shrubs and trees be planted inside the lower boundary wall and no interments take place at present within a reasonable distance of that wall.

By 1st January the churchyard extension fund stood at over £154 and the Bishop visited to consecrate the ground. The final cost was around £160 and was entirely met by donations.

At the Annual Vestry Meeting the Rector “said that the War continued in all its horrors and they could only hope that by the next meeting of the Vestry it would be ended …” Speaking of the churchyard extension, he said it was now worthy of being called God’s Acre.

It was decided that remunerating the choirboys would improve the standards and about £7 a year was to be allocated for the purpose.

The Rector said it gave him great pleasure to see so many present, especially Mr A.J. Poole back from military service. He expressed joy that the war was over and pride for the men at the front and thanks to God.

After appointments and thanks, “the Rector then said the question of a Peace Memorial would have to be considered, the form which it should take was very important and whether it should be purely a Church movement or a parochial one. Various suggestions had already been made. they included a lych gate, new choir stalls, an electric motor for the organ, a Y.M.C.A. hut, an institute and a village hall. … It was decided to postpone the discussion …”

There had been improvements to the church lighting, but more were required.

“The Rector spoke of the regret all felt in the continued illness of his Warden Mr Frank Poole, who had done so much for the Church but would not be able to continue in office. (He) then referred to the death of the late Mr Charles Bennett, expressed how great the loss was to the parish and to himself personally, he had been a most valuable worker in the Church life, having for many years read the lessons at the Church services and filled the offices of the superintendent of the Boys’ Sunday School. He was greatly missed by a very large number of people and he (the Rector) missed him as a true friend and helper.”

A special meeting on 3rd June considered revisions to the table of burial fees. 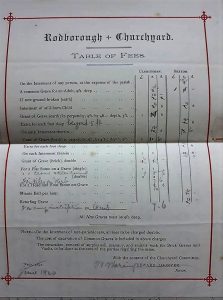 The new Enabling Bill required the Vestry should be merged with Annual Parochial Church Meeting from here onward.

The minute book continues to 1927 with the annual meeting covering only a statement of accounts, appointments and thanks.