The decision to erect a school in Bowl Hill was made at a meeting at Tabernacle House in September 1837. The charity was created by an indenture dated 19th October 1837 between Joseph Watts on one part and John Apperly and 12 others of the other part.  Joseph Watts lived at Stratford House and became owner of the old Stroud Brewery.

The land and property at Bowl Hill was “… to be used held and enjoyed by and for the sole use and benefit of a certain society of people who professed themselves to be of the Calvanistical principals pursued and upheld by the late Revd. George Whitefield … commonly called Methodists … who assembled … (at) Rodborough Tabernacle”.

Kingscourt and Bowl Hill were described as adjoining hamlets with about 300 inhabitants, of whom the greater part were children.

Following considerable financial problems in the 1870s, the property was demised to the Rodborough School Board in December 1879 for the term of 99 years at a rent of £3 per annum.

Towards the end of the 19th century over 150 children were registered (one can only think it must have been very overcrowded).

The school didn’t have piped water until 1908, previously it had been recorded as being brought in ‘by bucket’.

Mr John May was headmaster from 1884-1919. His wife was assistant teacher. He was followed by a Mr Mathias and shortly afterwards Mr Rowland Taylor was appointed.

John May died in 1920 and was buried in Rodborough churchyard. His pall bearers were ex-scholars and included Frank Davis who had been awarded the Distinguished Conduct medal in the Great War.

In 1927 an inspector’s report mentioned the school’s excellent playing field on the opposite side of Bowl Hill (thought to have been acquired after 1887), but this land on Bowl Hill was later sold and and council houses and bungalows were erected.

In 1932 there were only 18 infants attending. The school had become an infant school in 1931 and children moved on at age 7 (many to Rodborough School).

In WW2 the storeroom was commissioned as an air-raid shelter with an emergency ext doorway leading to the coal shed.

Electric lighting was installed in 1944.

In 1948 the canteen opened and school lunches were cooked until 1965.

In 1951 a second teacher was appointed and the school again catered for children to the age of 11+ and attendance was at 77 children.

For a while in the late 60s/early 70s Kingscourt School had a temporary ‘terrapin’ classroom in the garden of the house above it – by 1970 there were 77 pupils. 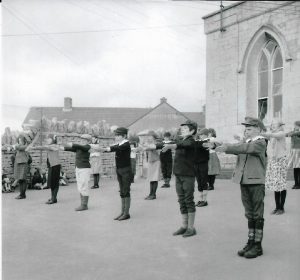 During our WW1 research we looked at the Kingscourt School log books held at Gloucestershire Archives. Here are some pupil names noted. It is not a comprensive list.