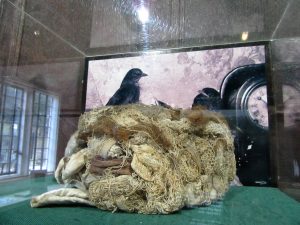 The Stroud News carried several pieces about a family of blackbirds who achieved acclaim in 1911. House painter, Samuel Haden of Bay Tree House, Dudbridge, kept a tame female blackbird, who was allowed to fly freely within his house. Feeling so much at home, the bird constructed a nest on the mantel shelf in the living room and laid four eggs. Accounts vary as to whether a ‘Mr Blackbird’ was involved; it has been suggested that Mr Haden substituted fertile eggs from the wild. However, four baby blackbirds hatched, thrived and eventually flew away. Stroud News readers were invited to view the chicks and Mr Haden proudly wrote to the new King, George V and his mother, sending photos and received a royal response.
Such was the notoriety of the birds that at Stroud Carnival, in June 1911, a float was paraded with a nest made of hay and little boys in black clothes, with blackened faces sat inside bobbing up and down. 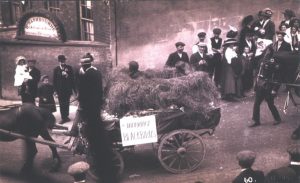 The original nest can be seen at the Museum in the Park. It sits on the mantelpiece in Gallery 7, alongside a changing display of old old local scenes from the Wilf Merrett postcard collection.

Julie
View all posts by Julie →

Sadly our exciting plans to commemorate the VE Day anniversary have had to be postponed. The current plan is to reschedule to VJ Day on 15th August. Watch this space! 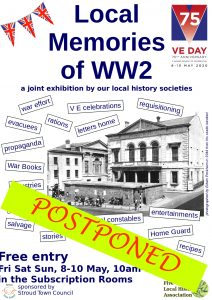