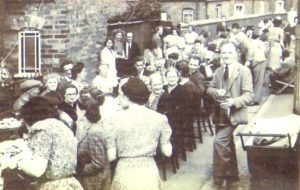 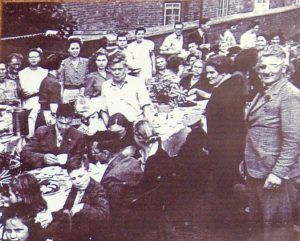 The following link has been sent to us by Bob Young. His father Les Young spent to his childhood in Rodborough during the 1920’s. He lived at Spillman’s Road and went to Rodborough school and played football for Rodborough.

The tragic story of Harold Pullen recounted by Les, was also related to us by the late Irene Connor nee Davis who was born in 1917, though she recalled the boy as ‘Sam’.

Yes.  Well, there’s a great big, stone porch, like that, you see, with like castellated things on.  Well, we children used to play ball, kicking and that in the street.  Inevitably somebody would kick a ball and it would get up to the top and this particular day this little boy, who lived down Spillmans Pitch – named Sam – and I suppose he was my age – about nine – and the ball went up.  “I’ll get it”.  He jumped on the railings.  Stood on the railings and took hold of the toppers and the whole lot came away and threw him back on to the railings.

And he prised himself off and he ran along the street crying “Mum.  Mum.”  And, of course, we were children all out there.  We were stood there, absolutely paralysed.  And, of course, he died, because his vital organs he’d pierced with that.

This is the press coverage of the case: pullen-harold-the-citizen-march-19th-1930