Plays were a feature at Rodborough Tabernacle long before the company named themselves the RT Players.

Thanks to David Cook for these photos estimated to be from around 1920 or a year or two later, when “The Red Goblins of Rodborough Wood” was produced by the Rev. C. E Watson (Pastor). 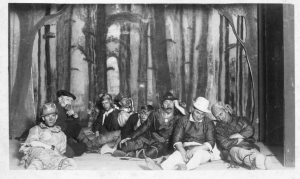 Rodborough Tabernacle kindly loaned us a set of eight carefully compiled albums of photos and memorabilia relating to some of the plays produced and performed at the Tabernacle.

In 1926 Rev Watson produced the mock opera; ‘O Tut Tut Tutankhamen’; very topical following the discoveries made by Lord Carnarvon and Howard Carter in 1923. Rev Watson was noted in the local press as a gifted writer, musician and conductor.

All local school children over the age of eight were invited to attend to the Saturday afternoon dress rehearsal.

The photos in this album are of a very professional quality and many are signed by the actors. They show magnificent costumes made by Mrs H.B Dauncey, Miss Daisy Smith of Kingscourt, Miss Phyllis Stephens of Roborough and others. The scenery was produced by Mr H.B Dauncey with Messrs. P Stanley and V Hodges. 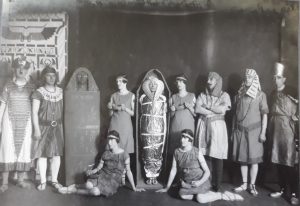 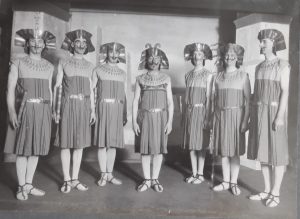 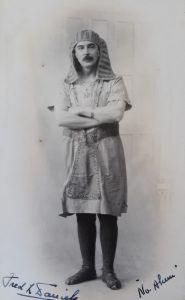 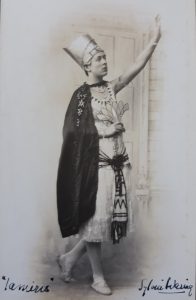 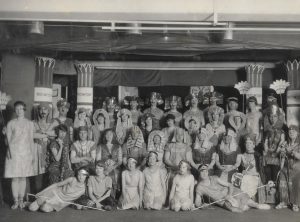 In 1929 the second production by Rev. Watson was the snatch opera, ‘The House with the Glass Window’ with lavish effects and an eight-piece orchestra.

The newspaper reports in depth the details of  the story set in Wester Isle: Eleven princesses were attired in green and in the opening scene are discussing the scarcity of attractive young men. Thankfully eleven virile Vikings appear!

Members of the cast praised by the press were Miss Ada Bramley as a queen and Miss Nelly Watts as Goody Glum. The Viking ship was made by Mr P.H.P Pacey. 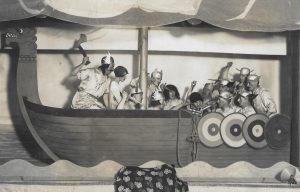 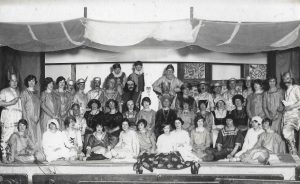 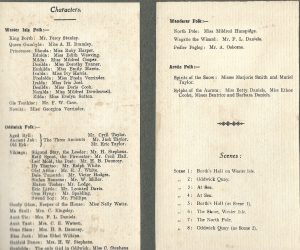 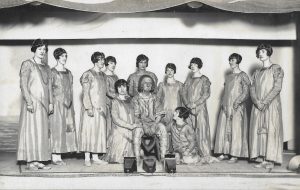 The RT Players formed in 1937 under the direction of Herbert Dauncey. We haven’t seen photos of the first show in the autumn of that year, but close on its heels in April 1938 came the farcical comedy ‘Mullion’s Millions’ by R.A.H Goodyear. The Stroud Journal believed this was not as good a script as the last, but the cast were on top form. “The acting honours undoubtedly went to Cyril Taylor, who played the role of Nickleby Mullion, a rough diamond, who made £3,000,000 out of Mullion’s sauce. He was endeavouring to escape from his fiancée Lady Hyacinth, well played by Nesta Beard, whom in a fit of madness he had promised to marry…”

Press reports were glowing for the April 1939 performance of the comedy ‘Such things Happen’. “… packed with laughter, thrills and romance …” Peggy White was singled out for outstanding acting as Bertha, the maid.

“Such Things Happen” was performed again in November 1942 with many of the same cast. The photos were fewer and smaller and placed at the back of the 1938 album. Past members now serving in the Forces received a special mention.

During the war years the RT Players productions “lightened the darker times”. In January 1940 when Four One-Act Plays were performed the Stroud News said of the audience, “In true English fashion they all braved the black-out trials and arrived at the not too easily accessible Tabernacle Schoolroom thoroughly wet through (or otherwise) in time for the performances given by the players in aid of the Red Cross”. It was noted that the hall was packed for each of the three performances and one of the plays had been previewed at Standish House in December 1939. 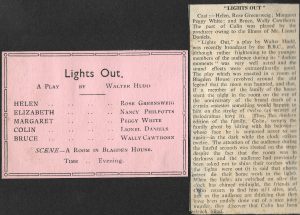 The second wartime production soon followed in May 1940 with ‘Double Dealings’. The producer Herbert Dauncey had to stand in for one of the principal parts at the last minute. Production costs were borne by Lionel Daniels enabling all the proceeds to go to Rodborough Tabernacle. This play too was performed to patients at Standish House. 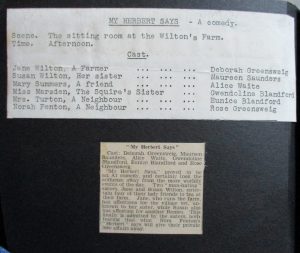 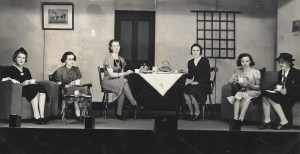 In 1941 the comedy ‘A Camel’s Back’ had been performed at the Tabernacle and became the first play to be sponsored by the Stroud Wartime entertainments committee and was performed under their auspices at the Church Institute (St Laurence Church Hall), with fundraising for the Stroud ATC. The Stroud News congratulated the company on continuing their activities in spite of wartime conditions and restrictions. 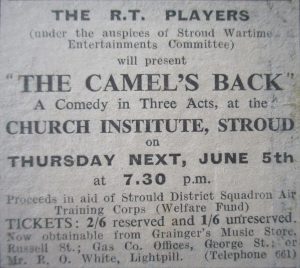 By popular demand, a final performance of ‘A Camel’s Back’ was made in a large shed at Daniels’ Ironworks where production had been in full swing only hours before. The arrangement was facilitated by Mr Herbert Dauncey, the producer, who was also the works manager at Daniels’ and funds were raised for Stroud Hospital.

The 1942 and 1943 plays are represented by a few small photos in the back of an earlier album. The press report from “Such Things Happen” in 1942 says; “In spite of heavy civilian duties and long working hours the RT Players presented their fourth wartime comedy with signal success …” The proceeds benefitted the Works Gift Fund for the emplyees of T. H & J Daniels’ who had joined the Forces. The last count of which was 43 employees.

The next record we have is this: 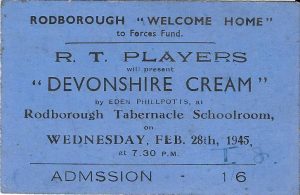 The R.T. Players were reformed in the 1970s by Rev. John McMinn & his wife Valerie, starting with nothing and with no scenery. They performed two to three plays a year in the spring and autumn to very appreciative audiences. Most were comedies but Valerie also directed “Noah” using young children as the animals. They were fortunate to have  Peggy Short and Nora Wilkins who were two of the original players started by Rev. Watson in the 1930s. After John and Valerie left in 1983, the R.T. Players continued to perform until the early 1990s when it was decided to disband, but people still talk about the enjoyment they had at the Tabernacle.

This was a dress rehearsal. Maggie Small recalls:

– RT Players in ‘Month of Sundays’ Left to right Mary Read, Shirley Mundy, Doug O’Brien, David Kilminster, Maggie Small (seated), Paul Saunders and Norah Wilkins. This is a long time ago, over 30 years, as you can tell. We had such fun and full houses of 80 to 90 in the Community Room. The Stage is where the kitchen now is.

Can we help you discover more about your Rodborough ancestor or property?

If you can provide us with a starting point; a name, a photo a set of house deeds etc, we will do our best to uncover more information. We have a large archive of Rodborough History and access to online resources. We will be at Rodborough Community Hall on Saturday 29th January from 10-3 and you are welcome to come along and have a chat or contact us online. More details here; https://www.rememberingrodborough.org.uk/news-events/hot-off-the-press/