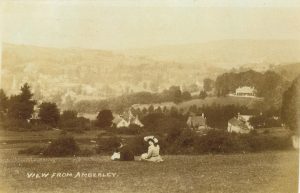 Rodborough manorial rights were transferred in 1806 to the former Hill House estate dating from 1651 and at the time owned by Mr Stanley Marling and tenanted by Judge & Mrs Ellicott.

On the evening of Tuesday 28th August, the judge and his son were playing billiards and heard something fall in the room above. On discovering his wife’s bedroom ablaze, the judge telephoned the fire brigade at 9.15pm.

By the time two horse drawn engines arrived, the north-west wing was engulfed in flames. Assistance was provided by the police and the hand engine from Woodchester Saw Mills. The equipment and access to water, which was eventually drawn from the pond, proved inadequate. Remarkably, no one was injured, though the firemen took considerable risks; one had a narrow escape when the roof collapsed and another, having tied two ladders together, directed water onto the inferno from the top of the walls. The police and staff attempted to remove furniture and possessions; ‘sofas, tables and chairs were piled in a confused mass’ in front of the building. 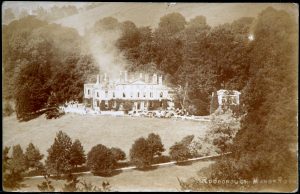 In little over an hour the main part of the building was alight, fuelled by wooden panelling and beams. ‘Bath Road soon became thronged with hurrying crowds, many hundreds of people proceeding to the scene’. The safety risks were considerable, ‘Dense volumes of smoke wafted upwards, myriads of sparks scattered and fell blazing for hundreds of yards around … Glass shattered in all directions…Probably the most striking scene was at 4am when the splendid oak paneled room was ablaze.’
By morning the whole place was gutted, except two or three rooms which later rekindled. The exhausted fire brigade retired at 4pm the next day. £15,000 to £20,000 was the estimate of damage to the manor, which had housed 25 bedrooms, 10-15 reception rooms and reportedly ‘as many windows as days in the year’. 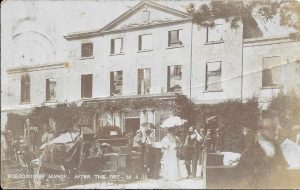 From the Stroud News 16th February 1917 – The purchase of Rodborough Manor by Mr Charles Apperly.

It has been stated that the house contains a window for every day of the year, whereas there were but 82 all told. It has also been asserted that King George had on the occasion of his visit to open the Thames and Severn Canal, slept in a room known as “The King’s bedroom”. Fisher’s history, however, records that it was on “Thursday August 14th (1788), His Majesty King George the Third, with his Royal Consort Queen Charlotte, and the three eldest Princesses, having spent some weeks in Cheltenham for the benefit of the King’s health, passed through Stroud on their way to Cheltenham to see the clothing manufacture of Mr Obediah Paul at Woodchester.

Rodborough Manor and its Lord

The celebrations following Marking Day in May 1919 are reported at length in the Stroud Journal. They were presided over by Charles Apperly, son of the late Sir Alfred of Rodborough Court and chair of the Commons Committee. In a jolly gathering, Charles entertained the committee and one or two friends at The Bear.

Interestingly, this is noted as his first appearance as ‘Lord of the Manor’, he apparently being the first Rodborough man to hold the title. This he came by, in purchasing the burnt-out shell of Rodborough Manor on Bear Hill in 1917. The house had been destroyed by fire in 1906, when in the ownership of Samuel Marling.

In jest, his manorial rights were discussed: In theory, he was entitled to all minerals below the common, but as he required to abide by common law, he wasn’t permitted to disturb the turf! Likewise, he owned all the timber, but he must not forget that the brushwood was the property of the poor. 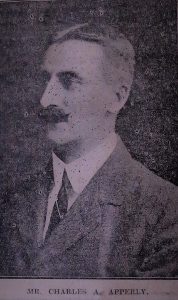 Charles is described by some sources as ‘the wastrel son’ and Rodborough Manor, in its poor state was repossessed by the bank in 1922. Following the closure of Apperly & Curtis, cloth manufacturers, in 1933, Charles left England for the South of France where he spent the remainder of his life. Rodborough Manor was rebuilt on a smaller scale by E. Lee Godfrey in 1922 and bought with manorial rights, in 1924 by Mr G.B Philpin of Rodborough Fort. The manorial rights ended when Thomas Bainbridge Fletcher, who bought Rodborough Fort, gave Rodborough Common to the National Trust in 1937.