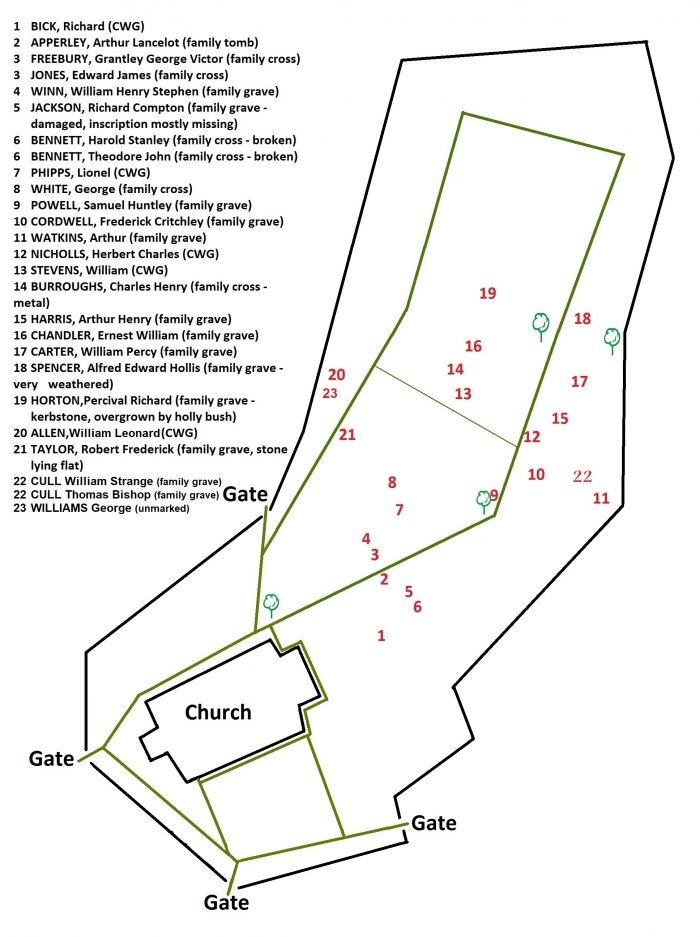 There are 21 graves in St Mary Magdalene churchyard which commemorate a soldier who died in WW1. Five of them have Commonwealth War Grave Commission headstones.

Commonwealth War Grave. 11th Gloucestershire Regiment. Known as Dick, he had been a soldier before the war and re-enlisted in August 1914 in South Wales, where he was working as a coal miner. Died at home of illness in April 1915 aged 38. His parents lived in Tabernacle Walk.

Commemorated on family vault. 1st Gloucestershire Regiment. Son of Sir Alfred and Lady Marie Apperly of Rodborough Court, Walkley Hill. Educated at Wycliffe and Cheltenham College. Killed in action in the Somme 1916. His body was never recovered and he is remembered on the Thiepval Memorial to the Missing.

This grave is notable as the Freebury family were stonemasons (Freebury and Hillman constructed the war memorial tablet inside the church). There are regimental badges engraved at the base of the cross. It is the grave of Edward & Clara Freebury, latterly of Butterrow, and commemorates their son Edward and grandson Grantley. Edward was married and living in Wales when he enlisted. He died of dysentery in Egypt in 1917 aged 28.  Grantley Freebury lived in Uplands. He was killed in action in Belgium in 1918 aged 20.

Commemorated on family grave. London Regiment. Lived at 4 Merton Villas, Lower Spillmans.  Had worked as an assistant cutter in a clothing factory. He was killed in action near Jerusalem in 1917 aged 24 yrs.

Commemorated on his parents’ grave, the stone is in very poor condition.  5th Gloucestershire Regiment. Dick was an only child, from Rose Villa, Bath Rd, Lightpill. In Belgium in 1917 he sustained severe head wounds. Reports said he was captured by the Germans, who dressed his wounds, then he escaped and regained the British lines, dying 8 days later. This is probably not the truth. 22 years of age and had been on active service for 3 years, winning the Military Medal and the Distinguished Conduct Medal (awarded posthumously). His mother died shortly before him in 1916 and his father in October 1918. At his father’s funeral, Dick’s dog, a white-haired terrier, later his father’s precious companion, followed the coffin.

Harold is buried in family grave. Royal Garrison Artillery. Attended Marling School, later gained a BSc and was working as surveyor of taxes in Birmingham. Enlisted in January 1915 and died in April 1915 aged 25 in a motorcycle accident whilst training in Cardiff.

Theo Bennett is commemorated on the family grave. Worcestershire Regt. Started his career as a clerk with accountants Randall & Payne. Keen sportsman and musician. He was killed in action  in 1918 in Palestine aged 24.

Another brother Leopold is buried here. He died aged 24 of pneumonia in 1914. He was not a soldier.

The fourth of the 5 boys in the family was Captain Paul Bennett, who survived the war and was awarded the V.C.

Commonwealth War Grave. 8th Gloucestershire Regiment. Lionel died in 1916 in a military hospital in Rochester, having been evacuated back to ‘Blighty’ from France with severe head injuries, 2 months before his death aged 29. Most of his life was spent in the Bisley / France Lynch area but at the time of his death, his widow and three children Rosie, Ivy and Thomas were living in Butterrow West.

Welsh Guards. From Moors Terrace, Butterrow. George went France in March 1916 and died aged 24 in Belgium, three days after being shot in the head. He was formerly  employed at Daniels Ironworks at Lightpill as a patternmaker.

Commemorated on family grave. Royal Navy Reserve. In 1901 he was aged six and living at Wallbridge House. He wasn’t born in Rodborough and the family later lived in London and at Bownham, but Sam’s father was a Butterrow boy who rose from humble beginnings to become a woollen manufacturer and died at Bownham in 1927. Sam was killed in action in France in 1918 aged 23.

Commemorated on family grave. Known as Ted. He joined the Middlesex Regiment on his 18th birthday and was only 19 when he was killed at Ypres in 1917. He had worked at Holloways clothing manufacturers as a warehouseman and ‘was known as one of the sweetest men in the factory’.  He lived at 4 Stanley Villas on Spillmans Rd.

Commemorated on his wife’s grave. 3rd Gloucestershire Regiment. From Whiteshill. Arthur married Julia Stockwell, a munitions worker of Rodborough in October 1917. Tragically, he was killed in action six months later and Julia died of flu, complicated by industrial illness on their first wedding anniversary in 1918.

Commonwealth War Grave. Herbert came to Rodborough in 1915 with his son, and enlisted in the Royal Marines soon after. They boarded with two ladies at 22 Spillmans Rd and the son, also Herbert Charles, was well looked after by them until the end of the war. He was only 13 when his father died in October 1918 of injuries sustained in action near Cambrai in France. After the war, young Herbert  returned to family in Newport, Gwent, but he came to be beside his father’s grave in November every year until he died, aged 96 and the family continue to uphold this act of remembrance.

Commonwealth War Grave. Gloucestershire Regiment. William was a 20 year old labourer from Kingscourt and of a family of travellers, when he joined up in December 1914. He was injured by gunshot wounds through the spine in France in 1916, discharged in 1917 with life changing injuries and died on Boxing Day 1918.

This grave of Charles and brother Frank is marked with a simple metal cross, probably made by their father who was a metal-worker. Charles lived at Court Bank (now demolished, off Butterrow Hill). Gloucestershire Regiment. He was injured  at The Somme in 1916 and contracted TB from which he died at Over Hospital, Gloucester ,in 1919, aged 24 . His brother Frank also died of TB, aged 18 years.

We have successfully applied for Charles’ death to be recognised by The Commonwealth War Graves Commission.

Commemorated on family grave. 14th Gloucestershire Regiment. Had had lived at 19 Bath Rd Terrace. He was missing presumed dead in 1917 in Belgium and his parents later received a letter from a German soldier who had seen his body and confirmed his death. He was 24 years old. The Soldiers of Gloucestershire Museum have the letter and his medals.

Commemorated on his sister’s grave. 5th Gloucestershire Regt. He lived at Tabernacle Walk and Bowl Hill. Died in 1917 in France of wounds received in action. He was 21 years old.  His sister Florence also died aged 21 in a tragic industrial accident

Commemorated on family grave. Royal Berkshire Regiment. Had lived at 10 Frome Terrace, Bath Rd. Worked as a baker and confectioner and was married to Alice.  He died aged 33 at Ypres in Belgium in 1917.

Commemorated on family grave. Worcestershire Yeomanry / Gloucestershire Regt. Known as Eddie, he had lived alongside Wallbridge Mill and was killed in action in Belgium in 1917, aged 20.

Commemorated on family grave. Gloucestershire Regiment. Born in Canada to British parents . By 1911 the family lived at Rooksgrove, Kingscourt. Had been an apprentice boilersmith and probably serving with the regular army at the outbreak of war. Killed at the Somme in September 1916, aged 21

Commonwealth War Grave. 1st Gloucestershire Regiment. Born in Rodborough, attended kingscourt School, from a travelling family. He joined the army in 1913 and was wounded  in France in 1914. By 1915 he was no longer fit to serve and discharged. Died 23rd Dec 1917 aged 21, of TB, whilst an inmate at Wotton Asylum in Gloucester suffering from shell-shock. His brother George was killed in action in 1918 and is also commemorated on the memorial inside the church.

Herefordshire Regt. Killed in action in France in September 1918. When he died his parents were running the Golden Cross Inn at the top of Dudbridge Hill. Robert also entered the brewery trade as clerk and in 1911 was a brewery traveller. He enlisted in Ross on Wye and is remembered on the war memorial there.

The Cull twins both died post war of illness or injury sustained while serving.

Thomas, an accomplished sportsman, died in 1919 aged 27 of TB. William had been invalided out of service after sustaining a severe neck wound at Passchendaele, while serving with the Royal Gloucestershire Hussars. He died in 1927 aged 24 after a long and painful illness directly attributable to his war injury.

George died at the Pike House, Lightpill, in 1917. He was 49 and had enlisted with the Army Veterinary Corps in 1915. He was discharged the following year with an illness unrelated to the war. His grave is unmarked.