Rodborough’s new school opened on Rodborough Hill. It replaced a school held at ‘The Old Endowed School’ alongside Rodborough Parish Church, which had been condemned by School inspectors on account of unsuitable sanitary arrangements and insufficient accommodation. It was recalled that the children there used the highway as a playground and were drinking water pumped from a well.

Read press reports about preparations for the new school here

Captain Forster, headmaster is described in the memoir of Les Young

During the First World War, to aid food economy, the school had housed a fruit evaporator, under the supervision of Rodborough’s Food Committee. At this time a show of produce began, that continued as an annual event in the post-war years. The photos show the school building in use for this in the 1920s.

In 1934 he recorded in the school log book “Sept 5th 1934. Wrote to the Managers re deplorable and dangerous state of the school playground”.

“July 25th 1940. Anti-aircraft firing took place in the neighbourhood. All children took refuge in the school shelters from 2-2.30pm. A German aircraft was brought down near Oakridge”

Our recent displays of old school photos have prompted some discussion about what happened to the primary age children from Rodborough School during the period that it became a secondary school (1949-62).

The school apparently ceased to be a primary school in 1949. The log book records the reopening on 26th April 1951 as a Rodborough Secondary School, though it has been suggested that this may have been phased in from 1949. However because of parental protests, a class of infants remained on site.

The log book records that junior primary children from Rodborough now attended Castle Street and Church Street schools. Edwin Benton recalls;
‘When I left Rodborough school when it closed I went to Church St which was a boys school. Most of the girls went to the girls’ school in Stroud. We all did not go to the Stroud schools. Some of my class went to Kingscourt school some of those on Dudbridge Hill went to Cainscross and I seem to recollect one lad went to Woodchester, so we were dispersed around the local schools.”

In 1944 Local Authorities were instructed to provide secondary education without delay for all children over 11 – but not to build new schools unless there was a large new population. Rodborough School was chosen to house the new senior school for Stroud under the same Governors as the existing secondary schools.

Rodborough County Secondary School opened in 1951 with 280 pupils. By 1957, with 427 pupils, schoolrooms at Badbrook (the old British School) and Church Street (the old boys’ Board School) were put to use. There was no assembly hall, no canteen, no playing fields and no changing rooms. The boys used the Common for sports, and borrowed playing fields, but there was no provision for the girls. And by 1957, overcrowding meant many pupils were travelling to the new secondary modern at Stonehouse.

The LEA had found a new and suitable site at Park Farm, Paganhill by 1955 but Ted Wheeler, the landowner, refused to sell because it was his most valuable pasture land. The County Council used compulsory purchase to acquire the land – at agricultural prices – and Archway School was built.

Credit to Marion Hearfield for the above notes compiled in 2017 for Stroud local History Society.

Archway County Secondary School opened in June 1961 with Mr S H Loosley as Headmaster. In September 1961 there were 554 pupils. 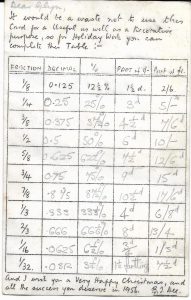 Rodborough reopened as a primary school in September 1962.

Cotswold Day Nursery ran from buildings on the school site in the 1990s.

Can we help you discover more about your Rodborough ancestor or property?

If you can provide us with a starting point; a name, a photo a set of house deeds etc, we will do our best to uncover more information. We have a large archive of Rodborough History and access to online resources. We will be at Rodborough Community Hall on Saturday 29th January from 10-3 and you are welcome to come along and have a chat or contact us online. More details here; https://www.rememberingrodborough.org.uk/news-events/hot-off-the-press/